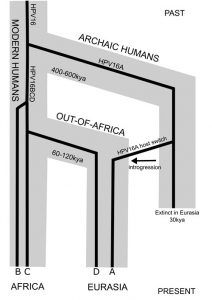 A new study from the Catalan Institute of Oncology has found that a particular papillomavirus lineage associated with anogenital cancers very likely originate through sexual transmission from archaic Neanderthals-Denisovans to modern humans. The study led by Ville Pimenoff at the Catalan Institute of Oncology and Ignacio Bravo at the French National Center for Scientific Research was published September 30 in the Journal of Molecular Biology and Evolution (DOI: 10.1093 / molbev / msw214).

With previous studies showing that almost everyone with Eurasian ancestry has a small proportion of Neanderthal DNA in them – up to 5 percent of the human genome – it has become evident that humans inherited a bit more than expected from the Neanderthals: namely a particular sexually transmitted papillomavirus infection.

A group of about 40 human infecting papillomaviruses (HPVs) are the most common sexually transmitted infections, and practically all of us host some of these HPV infections at some point in our lives until they are naturally cleared by our immune system. However, in the case of persistent HPV infection, especially with the strain 16, the infection often leads to cancer of the cervix, vulva, vagina, penis or anus.

By reconstructing the ancestry and timing of the evolutionary tree of HPV16 in greater detail than ever before, and by comparing the evolutionary histories of HPV16 and humans, a new pattern was found. Now, researchers have generated compelling evidence that HPV16 co-diverged with archaic and modern humans – only to be repopulated at a much later date through their contact with Neanderthals-Denisovans, and challenging the assumption that HPV16 co-evolved only with modern humans.

During the evolution of HPV16, variants A and B/C/D co-diverged with archaic and modern humans, respectively. When populations of modern humans left Africa and had sexual intercourse with Neanderthals and Denisovans, they were infected by the HPV16A variant that had evolved with archaic humans, and subsequently this variant thrived and expanded among modern humans.