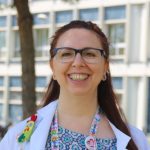 Back Members
Nurse at ICO since 1991, first at the Department of Hematology-Oncology, and from 2009 at the tobacco cessation consultation of the Tobacco Control Unit.

Anna holds a Degree in Nursing from the University of Barcelona (UB, 1990) and Oncology Nursing (ICO UB, 2004). She works as a nurse at the ICO since 1991, first at the department of Hematology-Oncology, and since 2009 she leads a full-time tobacco cessation consultation at the Tobacco Control Unit. As a nurse, she is responsible for the diagnosis, treatment and monitoring of the process of smoking cessation among patients and professionals from the ICO.

In addition, she is the trainer at the workshops on tobacco control and health promotion among patients and their families since 2003 and is a member of the Committee of “Smoke-Free Hospital” of the ICO-L´Hospitalet. She has participated in several research projects and scientific papers, and is a teacher at the Master Program of Oncology Nursing (ICO-UB-UVic).