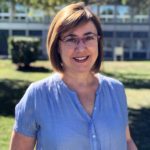 Back Members
Since early 2018, project manager in the Tobacco Control Unit, giving technical support in administrative management, including smoking consultation (citation and patient follow-up) and in the organisation of health promotion workshops on tobacco for patients and their families. Participates in various research projects of the unit giving support in the management of surveys and monitoring of patients.

Degree in Social Labour Graduate from the University of Barcelona (UB) in 1997. She works as a technical support at the Catalan Institute of Oncology since 1999, she has developed her work in different areas such as the Human Resources Department, the Medical and Nursing Direction Department, in the Training and Teaching Unit and as a a Technical Secretary of the Functional Units of Oncological Care of ICO and the Hospital of Bellvitge. Inside the Technical Secretariat of the Functional Units, organiser of the Bench-marking in the years 2012, 2015 and 2017 and within the Management, member of the organising committees of the ICO Symposiums in the celebration of the 10th and 20th anniversary.