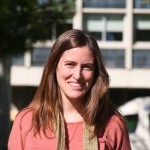 Back Members
Researcher at the Tobacco Control Unit. Research activities are carried out in parallel with the coordination activities of the Catalan Smoke-Free Hospitals Network. She also collaborates with the Unit of Addictions of the Hospital Clinic of Barcelona.

For 15 years she is working as a clinical psychologist specialized in adult mental disorders in general and, particularly, in the area of tobacco control. She has translated a number of books and other psychology scientific texts from English; currently she is a reviewer of publications in various scientific journals.